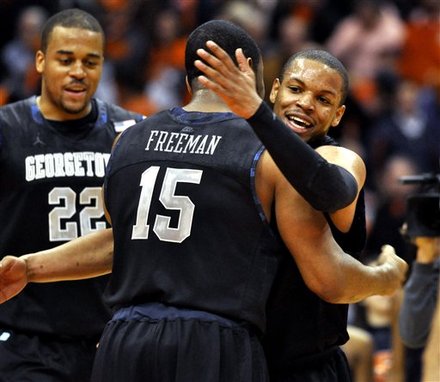 Chris Wright spoke to the media this afternoon for the first time since breaking his left hand against Cincinnati on Wednesday. The senior point guard, who had surgery on the hand yesterday, was in a positive mood after beginning his rehabilitation this morning. But he declined to comment on the specifics of his rehab or the timetable for his recovery.

“Whenever I can come back is the goal, regardless if that’s NCAA Tournament, Big East Tournament, whenever it is,” he said. “I’m not rushing anything, because obviously I have a future playing after this year. I’m just going to take it as I can. There’s no point in me being sad or dwelling on anything.”

His teammates don’t have time to dwell on the injury either with a game against archrival Syracuse scheduled for noon tomorrow. Coming off a 58-46 loss that was dispiriting enough before Wright went down, the Hoyas know that they’ll have to make adjustments if they want to beat the Orange.

The Hoyas will have to learn how to play without their leader quickly, as the Orange should pose a much greater challenge than Cincinnati. Georgetown prevailed in the teams’ first meeting earlier this month, but Syracuse comes to the Verizon Center as winners of their last three games, including most recently a victory at Villanova.

Wright’s absence is especially troubling because his penetration was the key to neutralizing Syracuse’s stifling zone defense in the matchup at the Carrier Dome. Without their primary ball handler, the Hoyas will rely on a collection of guards to try to replicate Wright’s ability as a distributor.

“It’s tough, but I think we have really good passers,” Clark said. “Austin is one of those guys who can get inside that zone—he’s a really great passer. I have to step and be a better passer. Markel, Vee—everybody has to be a lot better than we have been.”

Freshman Markel Starks and sophomore Vee Sanford are the backcourt players most likely to pick up Wright’s minutes. Starks has displayed considerable talent but also freshman inconsistency as Wright’s primary backup. He had one of his best games last time against Syracuse, scoring six points on perfect shooting. Meanwhile, Sanford has found himself buried on the bench for much of conference play, but he has shown flashes of brilliance in limited playing time, connecting on 63.2 percent of this three-point attempts.

Head coach John Thompson III made it clear that no one player would take over Wright’s role. Thankfully, the Hoyas’ offense does not need to be initiated by a dominant point guard.

“It’s not going to be a mantle or task that’s going to be placed on someone’s head and say, ‘You have to call the plays,’” Thompson said of ball handling duties. “Most of our offense is based on reads anyway, so we come down in specific sets, and then it’s everyone’s duty to call the play.”

There’s a lot at stake for Georgetown against Syracuse. The teams are tied for fifth in the Big East with 10-6 conference records, and seeding for the upcoming conference tournament is very much up in the air. A win for the Hoyas maintains the possibility of a top-four finish and a two-round bye, while a loss could easily leave them in the bottom half of the conference with a five-game path to the championship.

The matchup also happens to be the final home game for Wright and classmates Austin Freeman, Julian Vaughn, and Ryan Dougherty. The players will be honored in a ceremony 15 minutes before tip-off, which they admit is sure to be emotional.

“Everybody comes to the game excited, it’s really loud in the arena—that’s something I’m going to miss,” Freeman said. “For it to be our senior year and our Senior Day against Syracuse, I’m excited, and I’m pretty sure the other seniors are going to be excited too.”

Nevertheless, it will be bittersweet for Wright to greet his parents at center court and receive the cheers of thousands of fans and not be able to play in the game. The Hoyas’ floor general refuses to see it that way, however. All he sees is the opportunity that his team still has in front of it.