Update, 7:20 p.m., November 25: According to Georgetown Patch, an inspector from the Department of Consumer and Regulatory Affairs has condemned the property at 1424 Wisconsin Avenue after yesterday’s partial collapse.

Patch also reported that Major, a store located at 1426 Wisconsin has been closed “until further notice” due to damage caused by the collapse of the neighboring building.

Update, 7:55 p.m.: Wisconsin Avenue has been reopened to traffic in both directions, except for one southbound lane, according to MPD.

Update, 7:00 p.m.: This photo (right) was tweeted by the DC Fire Fighters Association. It shows the rear of 1422 Wisconsin, with visible damage done to the roof. 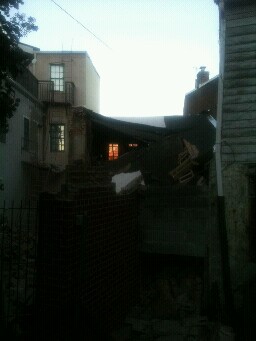 In May, Georgetown Metropolitan reported a reliable rumor that Z Burger would be opening a third restaurant at 1424 Wisconsin (it already has two restaurants on Wisconsin in Tenleytown and Glover Park), one of the structures affected by the collapse.

Original post, 6:09 p.m.: Late this afternoon, the building located at 1422 Wisconsin Avenue partially collapsed, potentially compromising the structure of 1424 Wisconsin as well. MPD and DC Fire responded to the scene, and traffic on Wisconsin between Dumbarton and Q Streets has been diverted indefinitely. According to the Twitter account of the DC Fire Fighters Association, the gas company is still working to shut off the building’s gas supply.

Hours later, the smell of gas remained in the area, but DC Fire said that a gas explosion was not the cause of the collapse. Firefighters told ABC7 News that the building likely collapsed because its construction was unsound. The owner of a neighboring business told ABC that the building had been vacant and under construction for the last three months. DC Fire officials continue to investigate the cause of the collapse.

This post will updated as we gather more information.

← Happy Thanksgiving from Page 13!
Fr. Maher to leave Georgetown for the University of Scranton →