We Are Georgetown: Hoyas, still without Smith and Trawick, face Xavier tonight 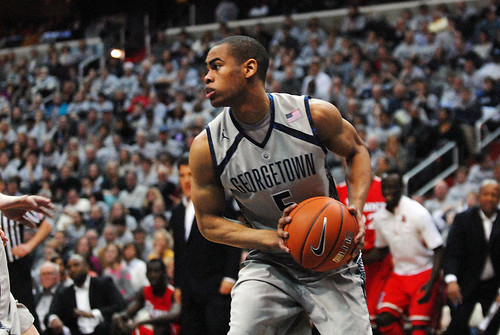 After a resilient 70-67 overtime victory against Butler, the Georgetown men’s basketball team (11-4, 3-1 Big East) will look to continue their winning ways tonight when they culminate their three-game road-trip at Xavier (13-4, 3-1 Big East), in their toughest conference matchup to date.

Unfortunately for Georgetown, junior center Joshua Smith, with academic issues, and junior guard Jabril Trawick, with a broken jaw, will be unavailable to play. No timetable has been set for their returns.

Due to their absences, some players can expect an increase in their minutes. As evidenced in their prior contest against Butler, senior forward Aaron Bowen, senior guard John Caprio, and freshman guard Reggie Cameron all had a career-high in minutes played.

Georgetown sophomore guard D’Vauntes Smith-Rivera will look to continue his strong performance as well. In the Blue and Gray’s two games last week, Smith-Rivera shot 50 percent from the field all while averaging 18.5 points, 6.0 rebounds, and 3.5 assists. Smith-Rivera’s play did not go unnoticed as he was named to the Big East Weekly Honor Roll for the second consecutive week.

Despite their win against Butler, the Hoyas struggled to stay out of foul trouble, as Lubick, junior forward Mikael Hopkins, and senior center Moses Ayegba all fouled out. As a result, this prompted Georgetown Head Coach John Thompson III to use some unique lineup combinations to close the game with Caprio and Cameron forced to play in the frontcourt.

“It shows us that we can rely on the depth of our bench to make some plays for us,” said Lubick. “Those guys really stepped up and we’re going to need them moving forward.”

One of the early surprises in the Big East so far this season, Xavier enters the game on a roll, having won eight of their last nine games. During their hot streak, they have defeated many notable opponents, including Cincinnati, Alabama, Wake Forest, St. John’s, and Marquette. But in their most recent contest, the Musketeers lost to Creighton in a high-scoring affair, 89-95.

Sophomore guard Semaj Christon, a potential future NBA lottery selection, leads the Musketeers in scoring and assists, averaging 16.2 points and 4.4 assists per game, respectively. Junior center Matt Stainbrook complements him in the frontcourt as the team’s leading rebounder, averaging 8.6 rebounds, and second leading scorer with 11.4 points per game. However, the Hoyas cannot manage to focus all their energy on these two players, as five other Musketeers average at least 7.5 points per game.

“They’re a balanced team,” said Thompson. “They have a very good point guard, a very good post presence, and shooters around them.”

The Hoyas will also have to contend with a hostile environment, as Xavier possesses a tremendous homecourt advantage at Cintas Center. Since they first started playing there in 2000, the Musketeers have won 88 percent of their home games with an overall record of 185-24.

“It’s just another game, another opponent, with a pretty good fanbase,” emphasized Thompson.

This will be a crucial test for the Hoyas in their quest to repeat at Big East regular season champions.

“That’s been our goal since day one,” said Lubick. “If we can go out and get one tomorrow, we’ll be in good shape.”

← Vox gets into treble: Garage Rock to play in your garage-less dorm
D.C. cabs left without credit card readers as company goes out of business →

One Comment on “We Are Georgetown: Hoyas, still without Smith and Trawick, face Xavier tonight”